Suppose you're on the hook to create a vision statement for a new organizational initiative. This seems like an assignment that is simple, complex, and fraught with potential missteps - all at the same time.

That's especially true if the organization has already launched an initiative before recognizing the need for an over-arching vision statement.

When that happens, what visioning exercises make sense? How do you develop a vision statement when it is trying to catch up to an initiative that is already underway.

Your strategy for selecting visioning exercises depends, in part, on what type of direction has been already communicated about the initiative. Here's our quick advice on potential first steps for visioning exercises based on various starting points:

1. An initiative already has a slogan or catchphrase, but little else behind it

This describes a situation where a senior leader has coined a phrase or been mentioning a favorite new concept. This can lead to confusion and consternation in the organization as everyone tries to interpret what the senior leader means.

Visioning Exercise Approach: In these instances, extract significant words from the slogan and work on defining what each of them could mean in describing the initiative's vision. Try to imagine several possibilities for each of these words. Using this approach, you’ll create a menu of strategic possibilities which you can mix, match, combine, and simplify to state a more defined vision statement.

2. There is already something resembling a vision statement, but it's too generic

We've all seen a jargon-filled statement that seems as if it were spewed fresh from an all-purpose business jargon generator. It may seem impressive initially, but no one has any idea what it really means for the organization that's touting it as a vision statement.

Visioning Exercise Approach: Your first step is to pull an existing statement as close to the organization’s real world as possible. If you took out all the jargon, is there anything left in the statement? Suppose average employees were saying this (and trying to remember it); how would they be describing it in real, understandable words? Are there words used in the statement that could be easily translated or modified to link to strategic foundations the organization already has in place?

3. A current big statement focuses completely on aspiration with no ideas for implementation

Visioning Exercise Approach: When you need to translate organizational aspirations into concrete actions, start asking outcomes-oriented questions. How will we know when we reach this vision? What will have had to happen to help us get there? What would be the potential first steps to reaching the desired outcome?

4. There isn't anything close enough to resembling a vision statement

Visioning Exercise Approach: In this case, start asking questions about aspirations, emotional words that describe a hopeful future, and possibilities customers would like the brand to deliver. - Mike Brown 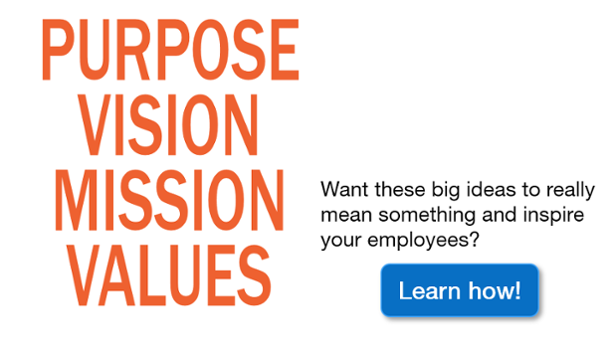 Is Your Organizational Vision Dimmed?