Success Strategy - Which Side of the Problem Are You On?

Someone noted recently that the furor generated on TV talk shows makes it clear the hosts aren't paid to be problem solvers. They're paid to be problem sustainers. A host's primary strategy is to generate and sustain an audience, and solving problems isn't part of the equation. What creates an audience is the host's ability to stir up concern and milk an issue for all it's worth. It's about finding innovative angles from which to fan indignation. And before a problem is, heaven forbid, solved by someone in the real world, a TV talk show host needs to have already identified the next crisis where their indignation will be focused.

I'd never really thought about a talk show host's strategy in quite those terms, but it makes perfect sense.

An interesting wrinkle, however, is how many people embrace the same strategy in their careers. Rather than taking constructive steps to solve problems, they fuel their sense of importance by finding innovative tactics to keep the day's (or week's or quarter's) crises going unabated.

The tough question for you to answer: Are you a problem solver or a problem sustainer?

Really? A problem solver? Is that what your co-workers or boss would say?

Now you're not so sure, huh?

After each discussion, project, or meeting where a problem is under consideration this week, make an honest assessment of whether you helped move the issue closer to a solution or if you helped to keep it alive. Put a mark on the appropriate side of the page.

At week's end, look at which side of the page has the most marks.

If it's the left side, good for you.

If it's the right side, maybe that's why you've been having so many challenges at work. At least now you know the most important problem in front of you: learning to be a genuine problem solver! - Mike Brown

"Got To Be Good Looking Cuz It's So Hard to See" 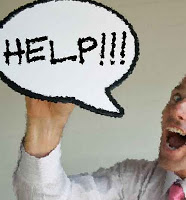