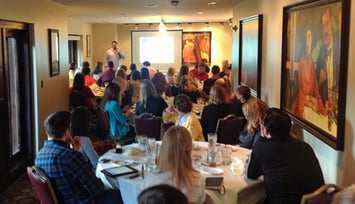 If you follow the @Brainzooming account on Twitter when I’m live tweeting a luncheon with someone incredibly tweetable, don’t be surprised to be inundated with forty or fifty tweets (sorry!).

For those who don’t follow @Brainzooming on Twitter, here via reformatted tweets and paraquotes, are just a few of the social media strategy insights Alex Knapp shared.

Mistakes Publishers (and others) Make with Social Media Strategy

According to Knapp, the biggest mistake publishers make is thinking there is something new in social media. Publishing changes based on the platform, and the only thing that changes over time is the type of content you put on each one. The challenge (and opportunity) with social media is that it is communicating, engagement, and marketing all at once.

Social media requires multiple abilities from someone in a short time in a small space. Many publishers (and other types of companies) make the mistake of picking people with only one talent who then struggle. Among the many skills needed to be great at social media, headline writing is THE social media skill.

Alex Knapp proposed a thought experiment: You have two people, one of whom you can hire to do social media for a publication. Do you pick someone who is early in a business career and all over Twitter or someone more senior with lots of work experience and no clue about Twitter? Knapp advises picking the more experienced person since it’s possible to train someone on Twitter in an hour. Training someone who understands social media to write well, think better, and market more effectively? Well, that takes considerably longer than an hour.

When it comes to taking the best advantage of varied content across channels, Knapp pointed out a great example from the world of publishing to illustrate his point: The New York Times wouldn't run an arts story on the sports page unless it had a very specific sports angle. Given that, why would an organization run the exact same story at the exact same time on very different social media platforms?

Similar to how we covered Mall of America featuring different content by social network, Knapp shared that at Forbes, Google+ is for tech news, LinkedIn is for startup news, and there are twelve different topic-oriented Twitter feeds, some of which have come and gone over time based on what’s working. Ultimately the goal for each platform (which may have much larger readership than a publication’s paid subscriber base) shapes how a brand approaches it.

When faced with too many social media options and not enough time to go around, Knapp recommends to start where a brand has its biggest audience and focus there. He also advises against the common idea of not putting resources toward social media because it’s free. He asked why a brand WOULDN’T want to put resources toward something that was free and worked vs. paying money for marketing efforts that cost a lot and are difficult to track.

There is a 3-person core social media team at Forbes. Their efforts are complemented by many, many freelance bloggers who are paid (very well according to Alex) based on the hits on their blog posts. (Hey, Alex, where do I apply?)  - Mike Brown 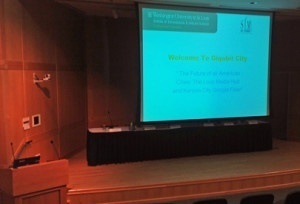 The EPIC International Summit: Does What it Says on the Tin