Reflections, Not Answers in the Face of Senseless Tragedy

As with most breaking news anymore, the first tip-off to the senseless tragedy Friday came via Twitter, as I was getting ready to head to a client session on new product ideas. Catching an overview of what was known at the time from CNN, I was out the door.

In retrospect, it was a mental relief to be away from the non-stop news and social media stream for a few hours.

Returning home late Friday afternoon, it was easy enough throughout the weekend to be sucked into the endless babble from TV news about this newest tragedy. Social networks were filled with admonitions from gurus about what people should or should not be sharing, people changing avatars to express themselves and what they felt, and warring opinions about what contributed to or would have prevented the tragedy.

Fixing a Problem with a Problem

In our new product session on Friday, we discussed the challenge of correcting a current problem by adding things to solve the problem that simply create new problems. Arming teachers and school administrators, as some suggested, seems to be a classic example of this. Ultimately, if an individual is willing to sacrifice his own life and keep his mouth shut while devising the evil he hopes to perpetrate, there is no real way to thwart him in EVERY public situation.

Maybe it’s about working to reclaim a culture that celebrates life instead of glorifying and cultivating its extermination.

Maybe it’s about paying as much attention to the killing and death (especially of children) that goes on one at a time, out of the media spotlight, as we do to more easily televised tragedies.

Maybe it’s about taking the energy poured into reacting to evil and pointing it toward doing something positive to avoid the need to ever have to react to a senseless tragedy such as this one again.

While there was a lot of talk about what laws, policies, and media need to change, there didn't seem to be as much talk about basics that really change things:

Maybe we need to work on these things now. - Mike Brown

Ideas from The Big Ideas in Higher Education Conference (#BigIdeas12) 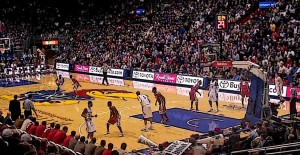