Thursday, July 26, 2012 was the long-awaited Google Fiber announcement day in Kansas City. The much anticipated and high secrecy corporate communications event played out in the Westport district of Kansas City at the new Google Fiber Space, conveniently located on State Line road, just inside Missouri on the dividing line between it and Kansas.

I scored an invite to the first of several Google Fiber introduction events over the course of two days as Google executives and mayors Joe Reardon and Sly James (of Kansas City, Kansas and Missouri, respectively) unveiled the Google Fiber offering.

Since there are already many stories evaluating the offers and packages Google Fiber introduced, there’s not much value in regurgitating what you can read and see elsewhere. Suffice it to say while I’m not personally a huge consumer of many TV channels, the packages appear to deliver the expected speed, flexibility, and coolness factor – all at a price point that has to have other cable players (esp. Time Warner Cable here in Kansas City) quaking.

1. Use mystery and mystique for all it’s worth in corporate communications. 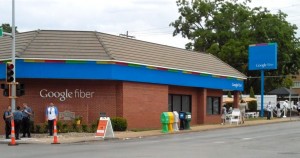 Google Fiber announcement event invitees received a single email the week before announcing the event with a link to an RSVP form. The email promised future details, with no indication of what or when details would be coming. It wasn’t until the day before an email arrived with a map and timing directions, but not much more. The intrigue behind the event, the agenda, and its location (although reader Paula Holmquist called me a full week before with a correct tip on the venue), along with a pre-rock concert kind of feel in the parking lot all played into getting attendees even more ready for a big announcement.

2. Doing what you’ve communicated all along is still the best corporate communications strategy.

In a discussion with Aaron Deacon after the event, he talked about how the day’s announcements weren’t that far off from what Google had been saying all along - although Google HADN'T been saying (features, affordable price points, starting installations where demand is strongest, etc.) all that much. But because people thought what Google had been saying sounded too good to be true, there was, in some circles, a built in readiness to find disappointment in the announcement (i.e., an inferior offering, too high prices, or some other fatal flaw).

While you can nitpick the offering (it’s missing some cable channel staples), Google basically delivered against what it had been messaging throughout. The simple formula works: If “What You Do” = “What You Say” then you “Win.”

3. Create new language you can (try to) own.

Who had heard of “fiberhood” before today as a way to describe a neighborhood that had banded together to vie for faster Internet speeds? Despite its new application in this setting, you already see “fiberhood” showing up in news stories, blogs, and tweets. (Interestingly, when you Google “fiberhood,” however, you get pages of results about car hoods.)

One potential opportunity for new language Google didn’t embrace, as pointed out by Dave Sandel (who we’re working with on the Gigabit City Summit), was "television." If they’d been up for it, Dave suggested what Google is offering goes beyond “television” or even “home entertainment.” Google missed the proactive opportunity, at least today, to craft a new term defining the integrated digital environment it’s pitching with Google Fiber.

4. No matter how cool your brand, forced skits with corporate employees trying to act are cheesy.

When we did the Building the Gigabit City large-scale brainstorming event, we were challenged trying to come up with ways to make 100 times faster Internet speeds tangible. We wound up using several about how cooking a meal would take seconds and a work day might last less than 15 minutes. Google added to the mix today with an example about how a car could drive to NYC while a broadband speed car wouldn’t have even made it out of the Kansas City metro area.

Nice example, but when it came time for a demo, the Google corporate employees had to play act a few family situations that were totally forced and pretty awkward. Very few executives are actors, so don’t make them do funny skits if doing so accentuates their lack of acting talent.

5. When you’re attacking a competitor, you CAN be subtle about it.

Time Warner Cable was in the news right before the Google Fiber announcement when it pulled a popular ABC affiliate (KMBC) because of a larger breakdown in negotiations over fees for local station programming. The disappearance caused a furor locally and led to online threats about customer defections when Google Fiber gets here. Within the Google Fiber event there was one brief mention about someone wanting to be able to watch KMBC. There was no need for more, because everyone familiar with the situation knew it was a subtle shot at a player who stands to lose a lot from Google Fiber. 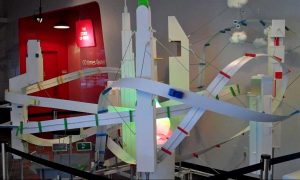 6. Even if your brand is all about digital, use physical space and create experiences to support your brand.

Google created a Fiber Space to serve as its first “storefront” in Kansas City to demonstrate the service and show-off the hardware. Creating cool tech-oriented retail spaces is nothing new, but force fitting one into a former strip center and gym location which happens to be nearly ideally situated geographically (i.e., on the Kansas-Missouri state line and just 4 blocks from the Wyandotte-Johnson county line in Kansas) is.

The Fiber Space not only features video displays demonstrating the equipment and applications for Google Fiber in healthcare, gaming, sports, etc., but also physical representations of Kansas City (including a great Royals and Chiefs sports card display). And in a great use of behind-the-scenes experience sharing, the Fiber Space features the “set” used for the Fiber section of the Google Fiber announcement’s opening video. Just when you think everything is CGI, you get to see there were really physical toy cars used for the video, and they do fall off the track!

And the whole experience was strong enough to make you forget you were walking through a former Little Caesar's Pizza location!

And there were more corporate communications lessons!

In the interests of time and length, I stopped this list at six corporate communications lessons, but there were more, including:

Were you at the event? Did you watch the simulcast? What corporate communications lessons did you take away from the event? -  Mike Brown 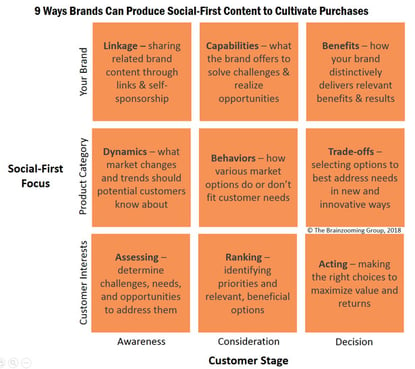 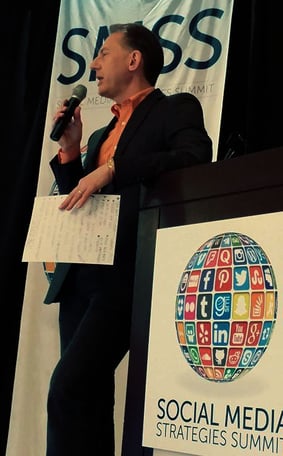