The inaugural TEDxWyandotte is in the books, and my talk leading off the second half of the evening covered “Diverse Ideas in a Porous Community.” Thanks to all my Kansas City-based friends who came out to see the event, which concluded with an incredible spoken word performance by Sheri Hall. Quite honestly, after seeing Sheri in rehearsal, all the speakers suggested putting her last since none of us wanted to follow her!

At some point, the TEDxWyandotte videos should be available online. We’ll highlight them here when they are posted. While waiting for the videos to go online, here are six suggestions for preparing a TEDx Talk based on my initial experiences for TEDxWyandotte.

Some people watch TED Talks frequently (even daily) for inspiration. I don’t, for a variety of reasons, chief of which is they often frustrate me more than they inspire me. While my initial inclination was to play catch up and watch a bunch of TED Talks, the only complete talked I watched was Sir Ken Robinson’s humongously viewed talk on creativity and education. My main objective was to look for structure and flow ideas since his video has obviously resonated with so many people. I suggest perusing the list of most viewed TED Talks, finding one that best matches your style or topic, and concentrate on it for presentation style and delivery ideas to consider.

2. Come up with a snappy title for your TEDx Talk

This is an area where I fell flat. Based on the timing for the event’s kick-off meeting and the initial press release about the event, I had to come up with a topic and title over a weekend. Mission accomplished, but it would have been far better to have a snappy title such as one from a TED Talk Barrett Sydnor pointed me toward: “When Ideas Have Sex.” That’s a TED Talk title for you!

3. Do something different to make it a YOU Talk

TED Talks have evolved into a format that takes the audience almost completely out of the talk. It has become overly focused on the speaker, in my opinion. That’s counter to my presentation style, and I didn’t want to deliver something that was forced and unnatural. I obviously followed the time limits and tried to emphasize stories as the format suggests. Instead of being one-way delivery, however, I structured the TEDxWyandotte talk similar to the “live blog” presentations I’ve started doing. In a live blog presentation, the audience is presented a list of topics and can choose how they’d like to see the talk progress. It’s the closest I’ve discovered to giving the audience hyperlinks (akin to a blog) to go deeper or skip content as they choose.

4. Dig for stories and ideas you haven’t shared before

Telling new stories was the best suggestion I read while developing the presentation. I incorporated a story from childhood no one outside my family has ever heard and included a variety of stories and examples from blog posts outside my typical presentation repertoire. Still other stories were reworked to fit the overall event theme (“Core Impact”) more directly. The result was that even the few pieces of familiar content in the talk received a very different treatment for TEDxWyandotte.

5. Decide whether you are targeting the live audience or the video audience for your TEDx Talk

Knowing the maximum live audience in Kansas City, KS (KCK) would be 400 people made creative decisions trickier. The decision point became whether to target the live audience or the (larger – I hope) video audience who would later see the TEDxWyandotte talk. While the in-person audience prompted the “live blog” approach (especially since letting the “community” drive the content was consistent with the topic/theme) and a few Kansas City, KS references, other creative decisions were made with the video audience in mind. There were fewer KCK mentions and visuals than originally planned and I minimized the references to previous speakers more than I’d ever do (since the video audience would have no context for those remarks). These decisions were not something I anticipated beforehand.

6. Be a good boy or girl on time and the level of commercialism

Among the apparently many requirements and recommendations that go along with TEDx, the most obvious one is completing your talk within the time limit – eighteen minutes for the longest talks. Another is to not make it a commercial talk. If you’re going to sign up for a TED Talk then you need to follow the rules on these. Plan and develop your presentation so you’re removing enough content that time won’t even remotely be an issue for you or the organizers to fret.

If you have the opportunity to do a TEDx talk, do it!

Even with trying to preserve the TEDxWyandotte talk as a MIKE talk in style and approach, developing this presentation was not how I would typically approach any other presentation. The result was that it felt “off” to me right up until the event day. Even still, if you have the opportunity to present at a TEDx event, don’t hesitate to say, “Yes.” The experience was a great way to stretch myself and feel a good type of creative tension! – Mike Brown 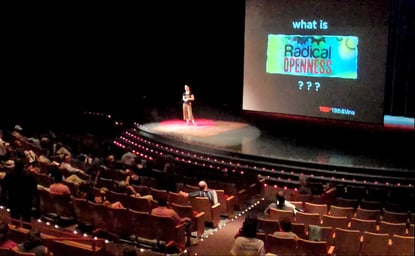