Often, the challenge isn't getting good, new ideas. It's hanging on to them long enough to do something about them! Today's guest article from Franis Engel addresses that very challenge.

Franis (@learncreativity on Twitter) thinks everyone is talented. She specializes in making complexities simple, innovating about how the Alexander Technique can be taught faster to groups. A high idea-producer, she can Twitter and tele-host simultaneously, and is planning a podcast series featuring the interesting secret geniuses she's collected as friends. You can find out more about her multi-talented adventures from the Big Island of HI and beyond at http://www.franis.org.

So here are five of Franis' great strategies for capturing more cool ideas before they simply disappear:

Why don't more people preserve their ideas and do something with them? Turns out expressions of futility are many.

One reason is there's a part of the brain that actively disregards what doesn't match expectations. Another part of the brain deletes the anomalies, since they don't match. What if these brain parts happen to be particularly active? Well, let's just say most people have an average of 45 seconds to get a good idea down before it goes “poof.” That's an average. Some people are on to the next thought much faster. So for them, it's not particularly possible to catch these fleeting possibilities.

That's where you come in. Someone who already knows the advantages of capturing great ideas can encourage a beginner at innovation to do the same for themselves by showing them how easy it is. For example:

So, while you're writing down your own brilliant ideas, take some time to sing the praises of others. Even if they drop the baton you're passing, at least you've got another interesting collection to blog. - Franis Engel 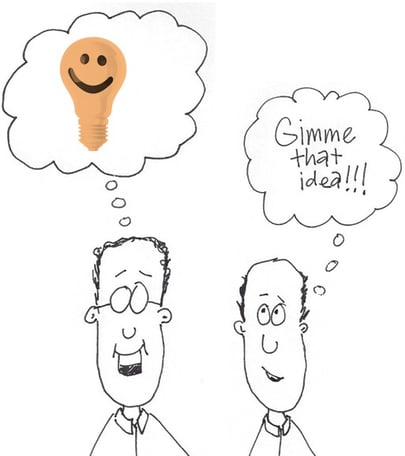