Steve Jobs and Anticipating Who Will Change the World

The outpouring at Steve Jobs' passing and the discussion about how one person can "change the world" create a relatively rare situation to consider some vital questions in a very real, very public context. 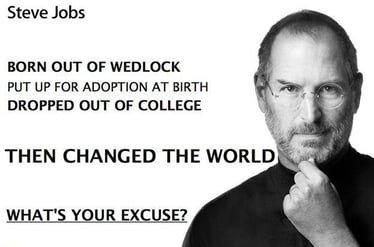 My Twitter (and sometimes phone call) buddy, Emma Alvarez Gibson posted this image on her Facebook wall last week. It was right on the heels of me re-watching the Steve Jobs Stanford commencement address. In the video, Jobs discussed being born out of wedlock to a graduate student in 1955. The setup in this challenging graphic is intriguing, yet it is clearly out-of-step with the decisions his mother would now face.

Today, there would be a clear decision point for his mother to make before, "BORN OUT OF WEDLOCK."

Today, Steve Jobs' birth mother would have a critical decision on whether her baby would be born.

Of course, she would have to make this choice without knowing about Apple, the iPod, the iPad, Pixar, and all the other sparks of creative genius that prompt so many people to say this one person, Steve Jobs, changed the world.

Suppose she would have had that choice back in 1955. What would she have decided about the unknown future of this child without any idea of what he would accomplish?

In the Stanford address, Jobs discussed how connections only become apparent after the fact and how things that happened to him didn't fully realize their impact until much later. That's no surprise. We can't see life-changing connections beforehand. Yet, our society has chosen to present individuals with the opportunity to make life and death decisions where there is no choice but to presume what incredible connections will or won't happen in the course of another individual's entire lifetime.

What was Steve Jobs' birth mother considering in 1955? Was she thinking about the possibilities this child might realize for society one day?

Maybe she was, but she could not have known for sure. 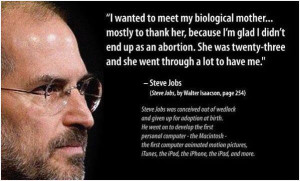 Steve Jobs' birth mother's decided to give her baby up for adoption with a hoped-for assurance he would receive a college degree courtesy of college-educated parents. While her expectation was not ultimately fulfilled, look at what this then unknown child contributed to the world.

Today, his mother would face a decision (plus encouragement for the decision's outcome) she would not have faced in 1955.

But the one thing common to 1955 and today is there are no tests to tell us what a baby will grow up to accomplish. There is no test to tell us how this one child will change the world.

Yet considering the million-plus decisions made in the US annually which presume a child will have a greater negative than positive impact on the world, we have to ask:

Just as with the earlier questions, there are no known answers to these two last questions. But we do know that "none" and "we're not worse off" are not correct answers. – Mike Brown

Constraints Week - The Constraint of Completeness 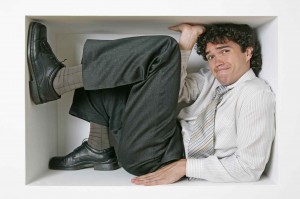 Constraints Week - Are You Walking Right Past Needless Constraints?