Pass the Drano® - Guest Post on Creativity by Betsy Caszatt

Following up two presentations I did on creativity and innovation at CreativeBloc, I ran several posts answering follow-up questions from audience members. One of the questions was from Betsy Caszatt. As Betsy and I corresponded, she mentioned sharing the creativity content from CreativeBloc with her team at Adfinity Marketing Group in Cedar Rapids, IA, where she is co-creative director and senior writer.  Adfinity Marketing Group is an advertising agency specializing in the food industry. Betsy, who reports that her brain “tries to zoom daily…with jumpstarts from this site,” was kind enough to provide a very gracious recap of my CreativeBloc presentations and how she passed along the creativity learnings to maximize her company's ROI in sending her to the CreativeBloc conference. That's a great practice to follow in any organization, so here's Betsy's guest blog post on using "Creativity Drano" to open up creative blocks:

Operating on the premise that an alarming number of brains can be blocked at any given moment (why you’re perusing this blog post instead of designing the next killer campaign maybe?), let me put in a few words about the roto-rootering that Cedar Rapids’ ad community got a few months ago.

The scene: CreativeBloc11 … 8 AM, lots of coffee, 16 sessions and a couple-hundred of the Walking Clogged. As karma would have it, headlining the plumbers du jour was Mike Brown from Brainzooming – who later spent a week on this space answering residual creativity questions sparked by his two sessions. This begins to illustrate the beauty of a day-long immersion in ways to open the mind – it releases a flood. And, boy, do we know about floods in Cedar Rapids.

Given Small Shop Syndrome (whereby a large percentage actually has to be there working), I was the sole attendee from our agency. As it turned out, it was too good to bottle up in one person, so a week or two later we had a download session with our own gang of six. Over a Cinco de Mayo lunch, a quick PowerPoint of highlights, a smattering of handouts, and a YouTube clip of Bill Gates getting a pie in the face – Mike’s prescription for unblocking creativity with something that makes you laugh – everybody got the spirit of the six sessions I’d gone to. Talk around the table was spontaneous, engaged and specific to us.

With companies struggling to extend training time and dollars, having fun and building on ideas from a conference are great ways to spread the benefits. These kinds of insights into the wackified ways we creatives think and the walls we come up against are what any creative “training” should be. I got what resonated with me and was able to rain it down upon our internal team. Ideas bubbled to the top at lunch and we’ve kept ‘em coming.

So in the spirit of shared creativity, here’s something our art director saw and shared. Open it, marvel at it, pass it on, unleash your neurons. And have fun. - Betsy Caszatt. 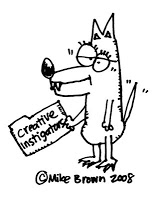 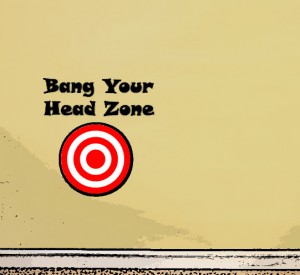