Don't Believe the Social Media Hype, but Feel Free to Bemoan It

It’s Friday, and this post was written on Thursday night. You know what that means? Hang on for a Larry King post . . . You can learn something from someone you don't respect, but it's much harder to respect someone you can't learn from . . . It’s been a long time since first grade, but I saw the little red headed girl from grade school at our local Starbucks. Her smile has not changed one bit . . . I'm a lot better at stress-induced eating than stress-induced creativity . . . I love the world of multiple screens except I keep muting and increasing the volume on the wrong screen . . . Why is it I can watch Pawn Stars & not go to a pawn store, but 2 minutes of Diners, Drive-ins & Dives, and I'm ready to start eating?

Social Media Hype and Cool from Way Back

Fear, forgetting, and fecklessness can all get in the way of making progress . . . Maybe one little change will be all you need to fix a problem. But sometimes, as they say in NASCAR, you have to take a big swing at it. It just depends . . . Someone having the right words in their Twitter name doesn't mean someone knows ANYTHING about those right words . . . At some point, you can either talk about your area of expertise for 3 1/2 days straight...or you can't.

Attention social media rock stars: If you're going to describe your blog using hyperbole, make it grammatically correct . . . Some people were talking about how my grandma used to go places with a camera and tape recorder. She was a content creator before content creation was cool . . . It’s amusing when someone "whiny tweets" you about nonsense, then goes back & deletes all those tweets (and by “amusing,” I mean “pathetic”) . . . You can tell I'm more than mildly amused (or befuddled) by the cool kid hype out in the Wild Social Media West.

Hate Not, Want Not

Why do they call them "task forces" and expect people to volunteer? "Fun forces" would make more sense, even if it is a lie . . . Three people I hate? Whoever designed airport bathroom stalls to swing in, people you’ve met before who won’t say their name next time you meet them, and salespeople who talked to you once on the phone three months ago who expect you to recognize them by their voice and first name . . . Ever notice how people say they want interaction at conferences, but they really just want to be talked to - and gifted with a copy of your slides . . . What if Pavlov had a cat? How would that have worked out for him?

It’s fascinating to meet someone new who's already formed a perception of you that's so counter to what you think of yourself . . . Right now, I appear to have about 4 mini-offices located around the house . . . You can't tell how warm the social media water is by standing on the side of the pool & pissing into it . . . One of my high school teachers gave us Hollywood Squares tests. Each person had to answer one question out loud in class. If you were wrong but bluffed well, you still got points . . . I continually forget how many lines I've lifted from "Broadway Danny Rose," i.e. "It's late, we'll get right out of here," "I'm willing to bet that you are full of good ideas, but what you lack is confidence, " and "You can't ride two horses with one behind."

There's a reason for most everything I do, but it may have nothing to do with the reason you think . . . Official spokespeople say official things. Passionate observers provide the real sense for a story and what's happening . . . People at TEDxWyandotte kept telling me to, “Break a leg.” Two days after the Kevin Ware deal, that wasn’t what I wanted to hear . . . I read about someone described as being a bold social media presence. The first thing out of her mouth was she watched TED videos all the time for inspiration. Obviously the standards for bold were cut by 95%, and I missed the announcement . . . It's not just me that thinks what I think, but that doesn't make it any better or easier to deal with.  - Mike Brown

Download the free ebook, “Taking the NO Out of InNOvation” to help you generate fantastic ideas! For an organizational creative boost, contact The Brainzooming Group to help your team be more successful by rapidly expanding strategic options and creating innovative plans to efficiently implement. Email us at info@brainzooming.com or call us at 816-509-5320 to learn how we can deliver these benefits for you. 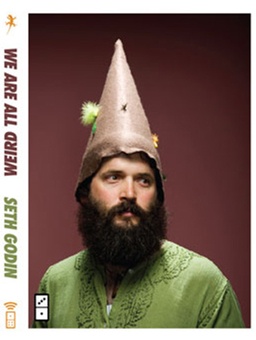 Why Don’t I Fit, Seth Godin? Because I Am Weird, Like You