Building on Theresa Antell's very well-received post from yesterday about the challenges of Twitter engagement, I view Twitter as a place to experiment, see how people react (or don't) to a variety of content, and look for creativity-inducing connections among the array of random tweets. Saturday morning I was tweeting a few things, including items from the web (about an interesting Twitter analogy) and TV (a snarky video-related tweet):

Shortly afterward, Michael Weber tweeted his reaction, prompting me to respond, referencing the Edie Brickell tweet (with typo included below).

Michael later answered he'd been referring to the Twitter/water analogy tweet, not the one about Edie Brickell. I found it interesting, though, his comment applied to both tweets (or at least when Edie Brickell first recorded). Michael's reply pointed to our need to always place ideas in some context.

The point is well taken and relates to something I'd been thinking about writing about this week: always asking how any random input we're presented with could spur a connection to a situation we're currently facing.

This came up earlier last week talking about why I wear orange socks. It became a daily activity for me in the corporate world based on how people reacted to a chance reference in a Fast Company article which mentioned I wore orange socks. Making the transition to my own business, it was a relatively random connection between orange and creativity that allowed me to continue doing it (and save the money of repurchasing not only my clothes, but all the other orange stuff in my life).

A big part of creativity is making connections others don't, won't, or can't. Part of that ability is having creativity exercises you can readily use. Another important part though, is being open to how random connections can lead you to creativity and new possibilities you would never have even considered otherwise.

It all starts with asking, "How could this fit?" to make a creativity-instigating connection when something surprising, unexpected, or random comes your way! – Mike Brown

The Brainzooming Group helps make smart organizations more successful by rapidly expanding their strategic options and creating innovative plans they can efficiently implement. Email us at brainzooming@gmail.com or call us at 816-509-5320 to learn how we can deliver these benefits for you.

Career Change Strategy - How Important Is Your Job Description? 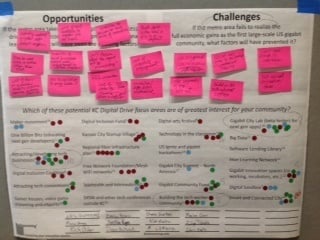