Mike reached out the weekend before the Super Bowl and asked if I’d be interested in writing a blog post about this year’s Super Bowl advertising.  I had no idea what I would write but I’ve always found the pressure of a deadline invigorating so without even giving it much thought, I immediately said yes!

Super Bowl Advertising by the Numbers

It is estimated that there were approximately 120 million viewers for the Super Bowl this year.  Come Monday morning, these viewers talk not only about the game, but also the Super Bowl advertising.  This conversation happens from the water cooler to the boardroom.  Everyone watching instantly becomes an armchair Creative Director with a lot of advertising opinions, some favorable, and some…. well, not so much.  What do they know anyway!?  Oh yeah, they’re actually potential customers!  That’s right, the folks who Super Bowl advertising was, in theory, created for in the first place!

This year, the average 30 second spot in the Super Bowl cost about $4 million to air.  This is up a staggering 14% from last year!  Talk about inflation!!!  Four Million Dollars for 30 seconds.  Man, that ad better work!  OK… maybe there’s a little pressure associated with creating an impactful advertisement for the Super Bowl.

So let’s pretend for a moment, that you had a spare $4 million lying around.  And for some CRAZY reason, you decided to run a commercial during the Super Bowl.  I already noted that you’re going to have 120 million people judging you, and they’re going to be comparing you with some advertising heavyweights such Budweiser, Doritos, Volkswagen, E*Trade and probably every car manufacturer on the planet.

Still feeling up to the challenge?

Are you prepared to answer that question?

In my opinion, the goal of TV advertising should be to create (or build upon) a profitable relationship between your brand and your consumers, and to clearly register a memorable (preferably favorable) impression that can build upon your brands equity over time.

In television advertising, there is usually a very STRONG relationship between creative execution (that is aligned with the brand’s personality and promise) and the ad's ability to create (or further build upon) a relationship with your brand.  And, being the geek that I am, I decided to perform a highly unscientific quantitative evaluation of the Super Bowl advertising this year with an extremely unrepresentative sample (13 people made up of my family and some friends – with a slight sample bias towards high school students).  Well, maybe we’re not all that unrepresentative.  We do live smack-dab in the geographic middle of the United States, and I suppose that make us the “average” in some way, shape, or form.

OK, so the objective of my little Super Bowl advertising research project was simply to demonstrate the relationship between creative execution and relationship potential.  To do this, we rated each ad that ran from the kickoff through the end of the Super Bowl.  And, each ad was rated on five simple measures (that’s over 3,000 scores I had to crunch).

Relationship Potential was measured through:

Creative Impact Potential was measured through:

Let’s see how your ad did! 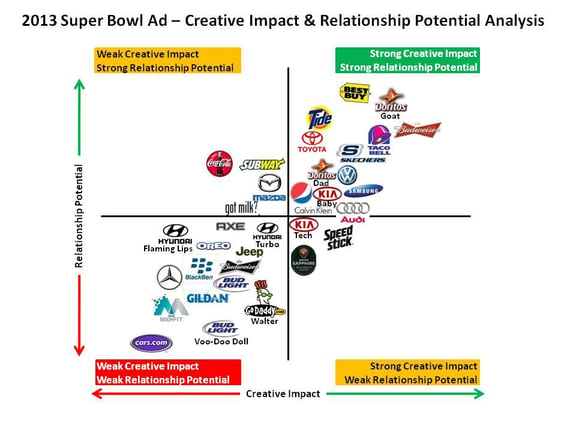 The top marks for this year’s ads goes to Best Buy, Doritos (goat ad), Budweiser and Taco Bell.  These ads scored well for both their ability to build a relationship with the audience, and their strong creative execution.

The bottom marks go to Cars.com, MiO Fit, Bud Light (Voo-Doo Dolls), GoDaddy.com (Walter), Gildan T-Shirts and Mercedes Benz (although I gotta give them props for the Stones tune!).  These ads were rated poorly for both Creative Impact and their Relationship Building Potential.

And by the way, the Calvin Klein ad in the Super Bowl did very well with the High School girls (I’m expecting that to be “shared” and “liked” a lot of Facebook over the coming days by teenage girls).

So how did my family and friends do?  Do our ratings reflect your opinions? - Woody Bendle

Download the free ebook, “Taking the NO Out of InNOvation” to help you generate fantastic creative thinking and ideas! For an organizational innovation success boost, contact The Brainzooming Group to help your team be more successful by rapidly expanding strategic options and creating innovative plans to efficiently implement. Email us at info@brainzooming.com or call us at 816-509-5320 to learn how we can deliver these benefits for you. 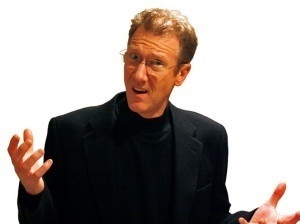 An Innovation Rant about Best Practices by Woody Bendle 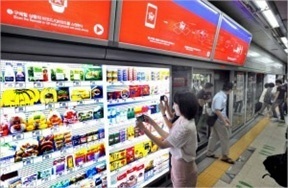