How Are You Staging Your Next Idea?

My wife told me about a home staging TV show where they have $500 to get a home ready to sell. In one episode, the homeowner had already moved their furniture, so the show's designer created cardboard furniture before the open house.

Since cardboard furniture obviously isn't functional, why would they do that?

When trying to sell a house, furniture isn't there for function. Its presence helps prospective buyers visualize the possibilities the house offers, and move them from cursory interest, to motivation, and to purchase.

That's a great example when trying to sell early-stage ideas.

In communicating a relatively new idea, many people limit their options because they assume without a relatively fully-designed and functional concept they'll undermine the sales effort. On the contrary, something merely suggestive of your full concept can be the difference in helping decision makers VISUALIZE the idea you're pitching.

Think how ad agencies pitch ideas. Invariably there's some type of visual - a storyboard, a relevant video snippet, sounds, role playing, etc. Again, none of them are functional, but they are all great at helping depict and sell-in a concept.

So don't let a lack of time, creativity, or initiative thwart your success at pitching ideas. Instead, figure out what your best equivalent of cardboard furniture is and improve your odds of creating a motivated buyer for your idea! - Mike Brown 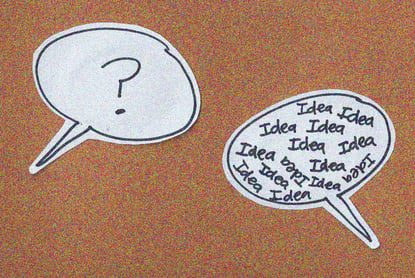 Creating Strategic Impact – Do You Need a Strategic Plan? 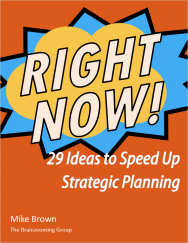 3 Strategic Planning Process Guides – Whether You’ve Started or Not!

Advice for When You're in a Challenging Situation