2011 TedxKC - A Tale of Two Event Experiences in Kansas City

The 2011 TEDxKC event was Thursday, August 18, and based on the tweets and blog posts during and after, it was a tale of two TEDxKC experiences at the Nelson-Atkins Museum of Art in Kansas City. For those who arrived very early and made it into the Nelson's auditorium to see the presenters live, it was the typical idea-enriching TEDxKC experience.

For everyone else who had to view the 2011 TEDxKC event via video in an "overflow" room in the Nelson's Bloch building, the evening was a huge disappointment - poor audio / visual performance, ineffective seating, slow response to issues (which were quite apparent if you were watching the #TEDxKC hashtag), and audience defections.

Much of the rest of the week on the Brainzooming blog will feature very positive recaps of the outstanding 2011 TEDxKC program. I received my personal ticket to the 2011 TEDxKC event courtesy of VML, the primary sponsor and organizer. Having worked with VML as our agency for many years, I have a number of relationships there, and think that Mike Lundgren, who has spearheaded the Kansas City TED events, and VML have performed an incredible public service by bringing TEDx to Kansas City.

Because the TEDxKC programs have been so strong, the resulting buzz and popularity of the events have outpaced the support resources (venue, production, surrounding logistics, and activities) being applied. The challenges were not from what was happening on stage at the 2011 TEDxKC event; it's what was happening (or wasn't) beyond the stage that created negative sentiment this year.

"Don't Meet Me There, Beat Me There"

We'd invited several people to attend TEDxKC and arrived really early. That didn't mean, however, we didn't experience intra-line squabbles. A group (or groups - tough to tell because they all looked alike) of older women  hassled us several times, repeatedly accusing me of butting in line. I got the glares, the snide comments, the whispering - the whole nine yards. I guess festival seating still leads to poor behavior among older baby boomers, the same people who earned festival seating its bad rap in the 1970s.

Their reactions were ironic, because being known for working a line pretty aggressively for position, I was on my best behavior at TEDxKC, trying to play by all the rules we had been told beforehand. Amazing how mad people get when they feel you've invaded their $10 worth of space.

If Only Someone Would Say "Why"

The 2011 TEDxKC theme was "If only. Only if." An intriguing theme, but one nearly unspoken from the stage. Any overarching explanation for why these presenters were chosen and some supporting context to the event was also lacking. Since TEDxKC is described (and rightly so) as a "curated" event, it would be helpful to have a perspective (delivered from the stage, contained on the lanyards, posted in the venue) that connects the theme, the presenters, and the thinking behind the program's design. Maybe it's in the iPhone app introduced for the 2011 TEDxKC. I don't have an iPhone (as I'm sure SOME others in the crowd did not), so if that's where it was, I missed it.

Later on in the overflow room fiasco, the Nelson-Atkins Twitter account announced free beer during TEDxKC for the overflow attendees. It may have helped a little. In a later Twitter conversation with Chris Reaburn, he remarked that free beer is the universal service recovery beverage, communicating, "Hey we screwed up, but about a cold one on us!"

Gotta Be Moving On

It's evident the Nelson-Atkins, while a grand location, is not working anymore as the TEDxKC venue. The post-TEDxKC reception was a madhouse in Kirkwood Hall. There was no apparent signage and the interactive aspects of last year's event were obscured by the mass of people waiting in line for drinks at only two serving locations.

The Rest of the Week

The next several days' blog posts will feature recaps of the TEDxKC presenters, including the two video presentations of 2011 TED talks. Rather than recapping the evening chronologically, the recaps are organized on the brief thematic explanation that was offered for TEDxKC:

If you were at TEDxKC, what type of experience did you have? If you've been to other TEDx events, how were similar challenges addressed? –  Mike Brown
If you’d like to add an interactive, educationally-stimulating presentation on strategy, innovation, branding, social media or a variety of other topics to your event, Mike Brown is the answer.  Email us at  brainzooming@gmail.com   or call 816-509-5320 to learn how Mike can get your audience members Brainzooming! 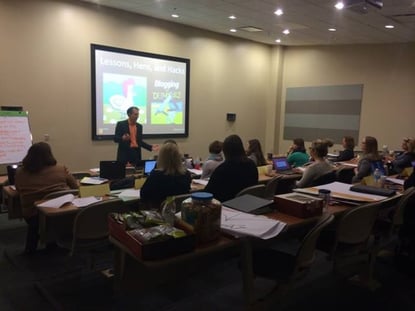